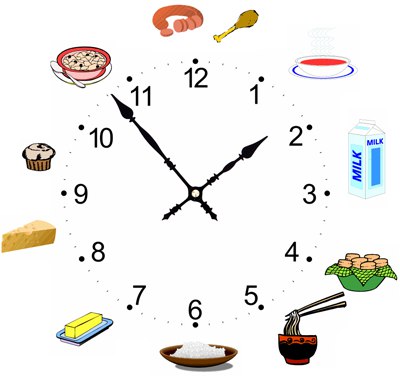 The notion of eating a little every few hours can be found in countless books, and slimmed-down individuals go to the point of absurdity as they attempt pathologically meticulous adherence to their ideal eating schedule. Everyone has probably heard someone leave the workplace and go to the bathroom to eat a perfectly balanced meal on time, or avoid partying or going out to restaurants for the same reason.
The most common argument is that eating more often and in small portions “boosts the metabolism.” It is based on the thermal effect of food, and on the fact that during digestion, metabolism does increase slightly. The thermal effect of food (TEF) depends on the amount eaten (and is approximately 10% of the calories ingested). So if you eat 1800 calories a day, your TEF will be 180 calories. If you have 6 meals of 300 kcal each, then each meal will consume 30 kcal, or 180 in total. If you have 3 x 600 kcal meals, the TEF from each meal will be 60 kcal, which is as a result it will again give 180 per day. In other words, the number of meals per day will not in any way affect the energy expenditure for digestion or the thermal effect of food.
Another common misconception is that it is believed that skipping one meal or just a long gap between meals will cause the body to go into “fasting mode”, store calories and avoid using fat in every possible way (or even slow down the metabolic rate). Breakfast is especially often mentioned for some reason. Allegedly, the morning meal “starts the metabolism” for the next day, and skipping breakfast makes the body go into a “fasting mode”. In fact, this idea is also based on a false understanding of the thermal effect of food.
The idea that skipping a meal reduces the body’s energy expenditure, or “triggers a fasting regimen,” comes from fairly old studies in mice and rats, and they certainly have a lower energy expenditure in the absence of food, even for a short period of time. Here it should be borne in mind that small animals have a short lifespan, mice live about two years and rats a little longer.

In addition, these animals do not have very large fat reserves, so that even a slight calorie deficit can be dangerous for them (in very small animals, skipping even one meal can lead to death). This means that skipping one meal or starving during the day in such animals will be a much larger share of their total life expectancy than for humans. One meal for a mouse can be equal to a day or more food for a person; and one day without food is similar to our 4-7 days. A person’s metabolic rate does not decrease during the first 3-4 days of complete fasting, and some studies show that it even increases slightly. A single meal does not mean anything at all (remember that it takes your brain 3-4 days to simply notice changes in leptin levels).
It is almost universally believed that eating more frequent meals will speed up fat burning and help maintain lean mass during the dieting period, but this is only true when there is an extreme difference in the number of meals, and even then, only when protein intake is insufficient. When there is a lot of protein, the number of meals is more or less indifferent. The main thing is to take care of the intake of protein in sufficient quantities.
Research results clearly show that the number of meals (3-4) does not affect either fat burning or maintenance of lean mass. The notion that there is some optimal amount of meals is simply wrong. For some people, especially women with low weight, fewer meals per day may be more optimal.
There are also some other benefits that a fractional meal is said to provide, such as keeping blood sugar stable or not hungry. In support of the first of these ideas, research is usually cited with a completely unrealistic scenario: one that compares, say, 3 meals versus 17 tiny “meals.” But this has nothing to do with life. Even with satiety and hunger, a controversial issue. One recent study found that eating smaller meals more often made people feel hungrier. And fractional meals do not help burn fat.